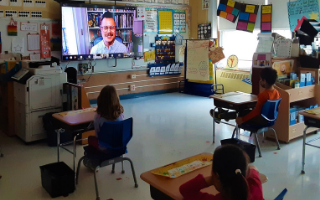 Who doesn’t love cute little elephants with polka dots? Apparently, they are a big hit at Todd Elementary School. Recently, kindergartners and first graders got a special treat – a virtual visit by author and illustrator Mike Curato, whose popular series of books about Little Elliott, an endearing polka-dotted elephant, has won him critical acclaim. The event was sponsored by the Todd PTA, which also gifted to kindergartners a copy of “Little Elliot, Big Fun.” They also gave to first graders a copy of “What If..” and to teachers a copy of “The Power of One: Every Act of Kindness Counts,” both of which Mike Curato illustrated.

Students in Jennifer Horowitz’s first grade class listened attentively as Mr. Curato read the students “Little Elliott, Big Fun.” In his third book about the polka-dotted elephant and his friend, Mouse, the characters visit an amusement park. The book features artwork based on Coney Island from early 1940s. 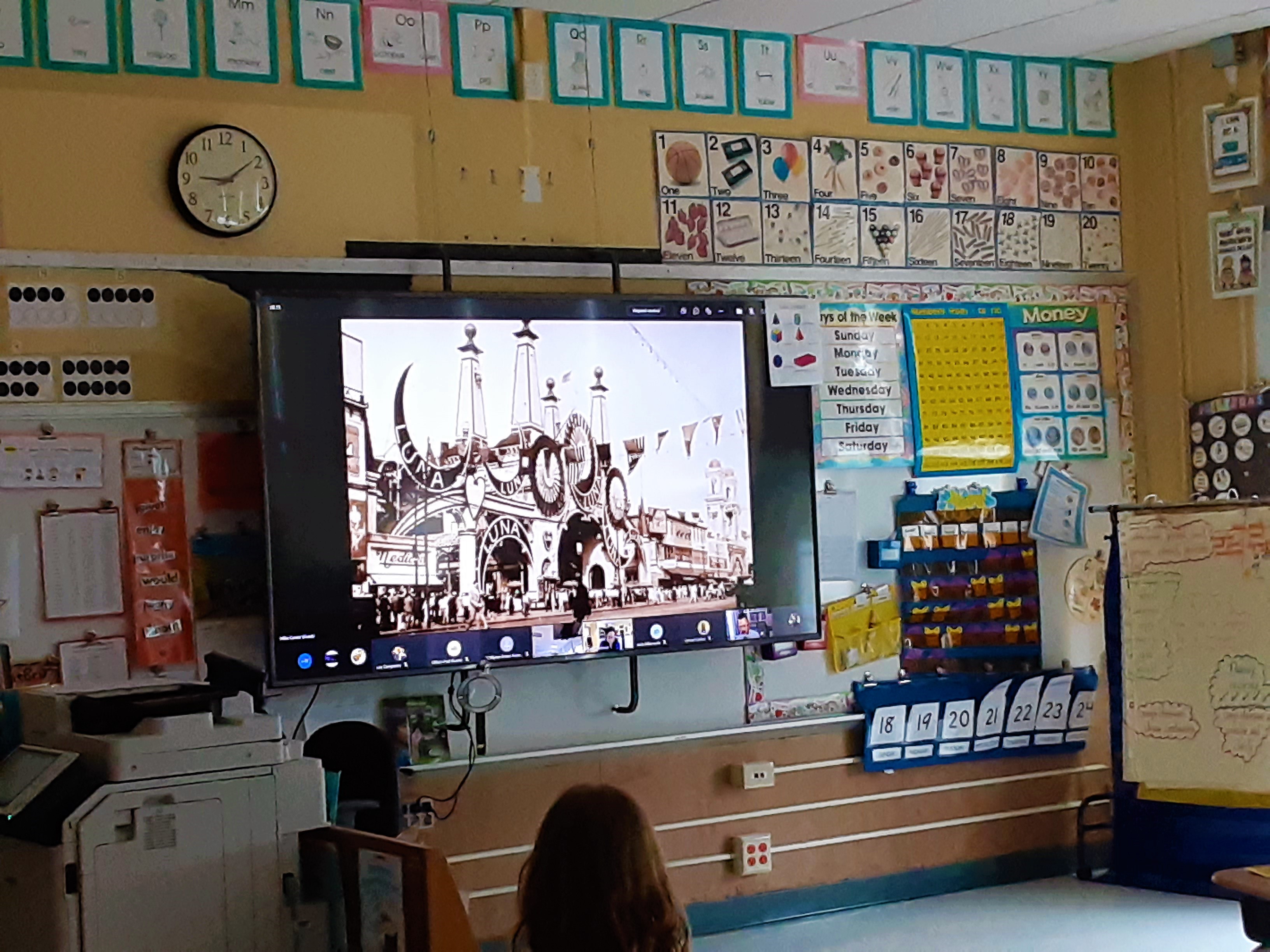 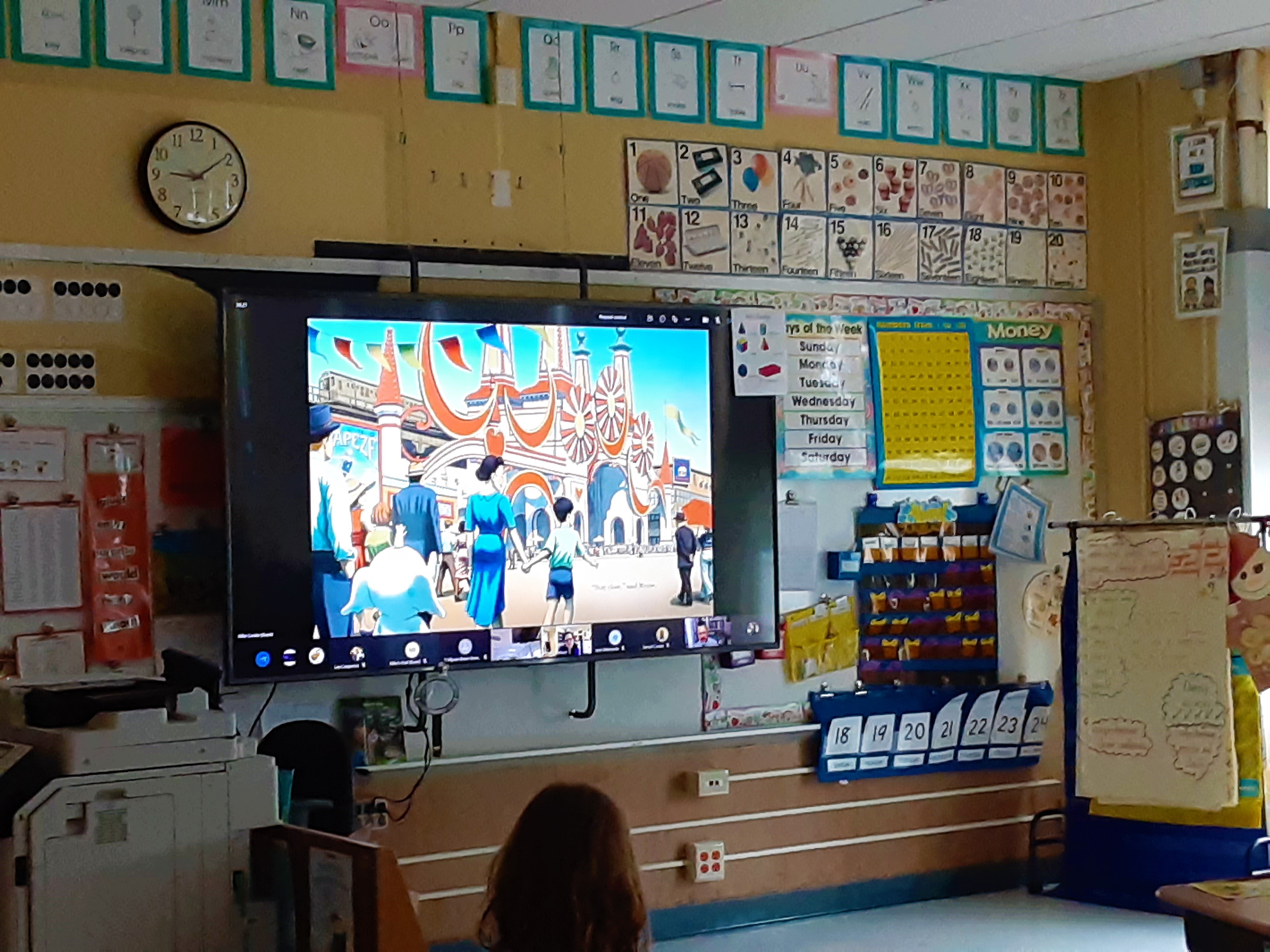 After reading the book, Mr. Curato described to the students how he had worked on the book and shared some images and research that he did prior to creating the artwork. He explained that he visited Coney Island and took photos during his visit but that he also looked at old photographs to see what Coney Island was like in the early 1940’s. He used those photos for inspiration for the artwork in his book and showed the students a specific photo that inspired him, as well as the actual drawing that he did for the book, which was based on that photo. 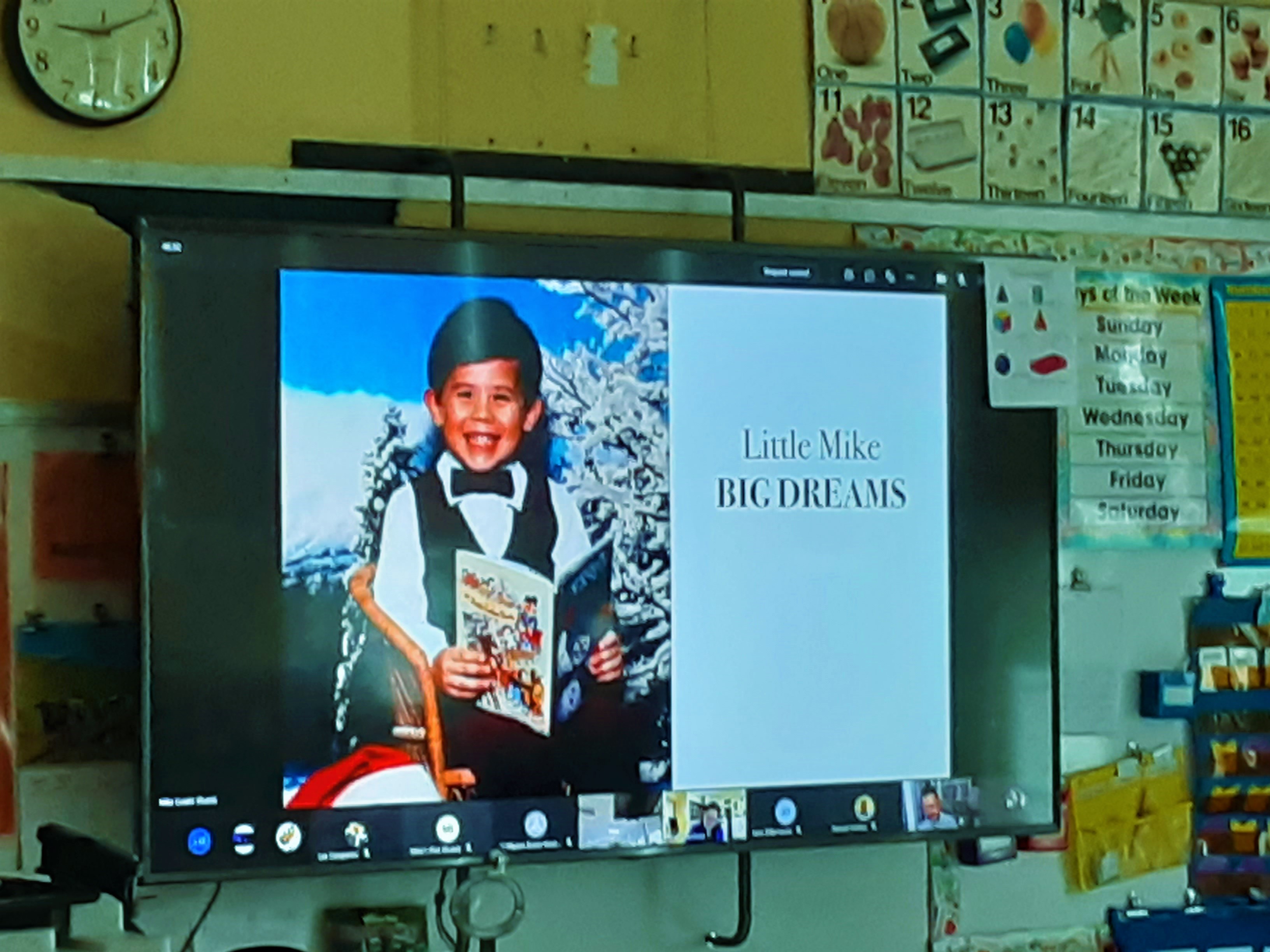 He also shared a photo of himself when he was a child and a drawing that he did and he discussed his background and his love of reading and drawing as a young child. 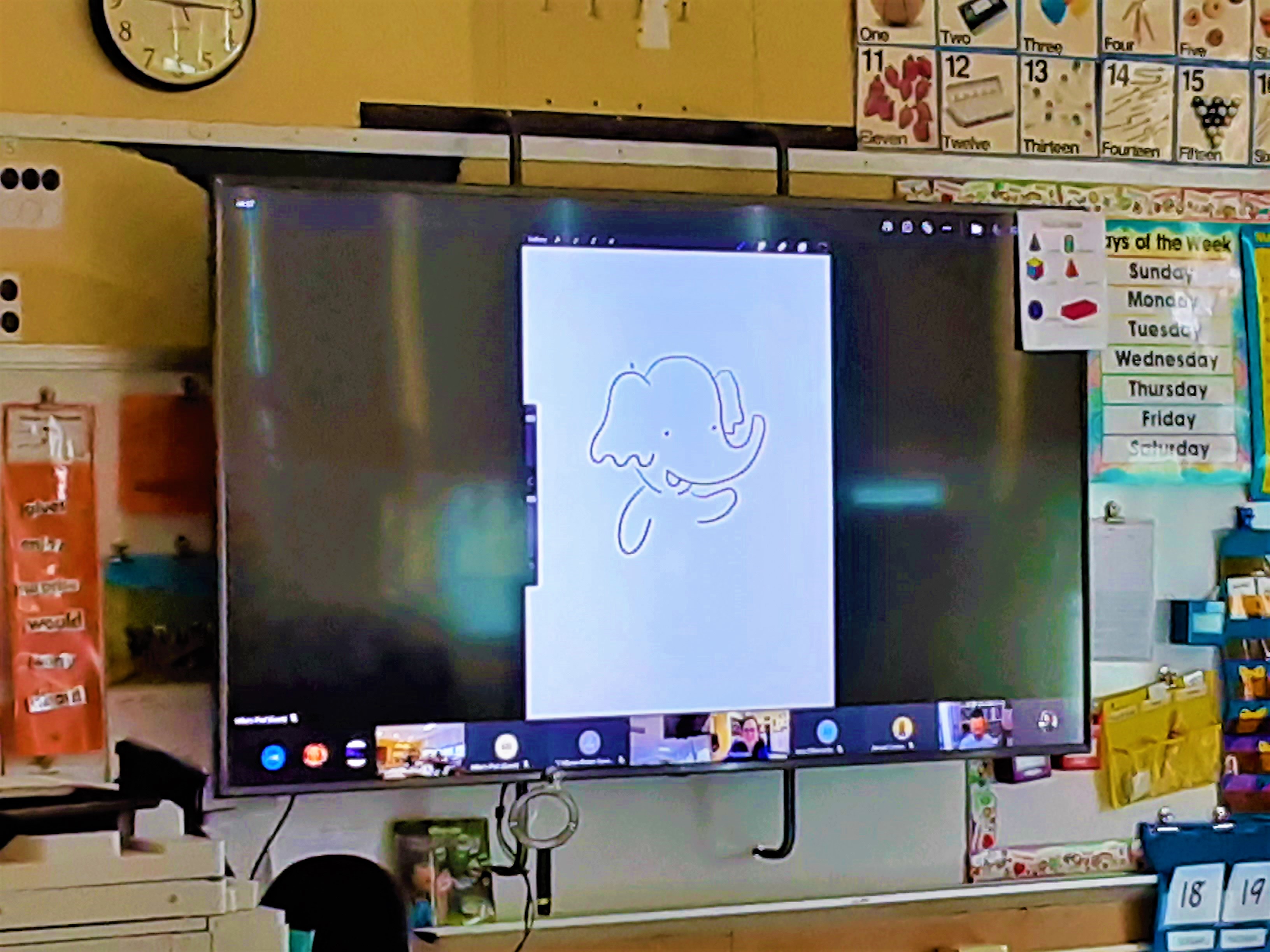 Next, he made a drawing of Little Elliott on the big screen so that the students could see how he creates the beloved character. As he was drawing and adding a backpack to create a school scene, students were able to ask him questions, such as which techniques he uses for his artwork, which of his books is his favorite and why he chose an old-fashioned setting for his books.

As one final treat, Mr. Curato read a brand-new book that he illustrated, “The Sharey Godmother.” The artwork in the book was dazzling and detailed. Indeed, there is something about Mr. Curato’s books and especially artwork, that appeals to young children. Todd Teacher Librarian Tara Phethean explained his mass appeal to the younger set:

“Mike Curato’s character, Little Elliot, experiences the joys and the trials of being young, so he appeals to young children,” she theorized. “He often cannot reach things, and he does not like the scary amusement park rides, for example. At the same time, kids understand his exuberant enjoyment of cupcakes, ice cream and spending time with his good friend, Mouse. Mr. Curato’s illustrations are colorfully rich, meaningful and fun. That is harder to do than it seems!”

“I liked when he drew Little Elliott going to school,” said Carolina, a student in Ms. Horowitz’s class. 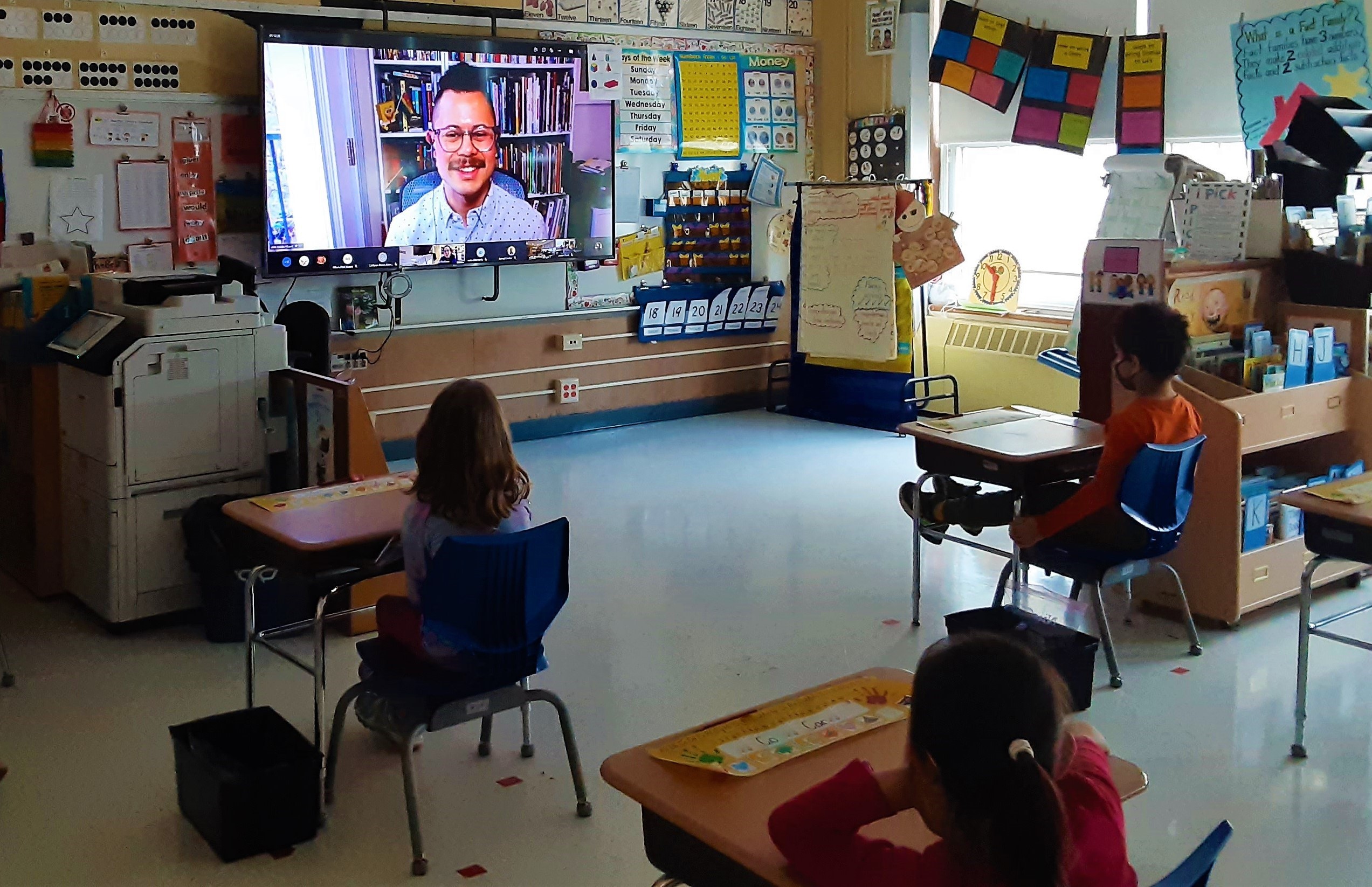