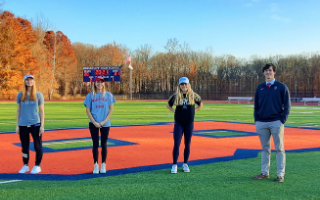 The students will participate in fencing, diving, lacrosse and diving teams at Duke University, University of Wisconsin, Colgate University and SUNY Buffalo. To celebrate this distinction, the four seniors gathered wit their families and coaches for a National Letter of Intent Ceremony.

By signing a Letter of Intent the student makes a commitment to attend a specific college or university, and the institution promises to provide financial aid. Once the letter is signed, other colleges and universities may not recruit the student.

The ceremony, which was held at the high school’s stadium field, began with the National Anthem, followed by an introduction from Briarcliff Athletics Director, Christos Drosopoulos.

“I feel particularly blessed to be surrounded by so many great and dedicated coaches, teachers, wonderfully talented scholar athletes, and the best group of supportive parents in all of Section One,” Mr. Drosopoulos said.

“I would also like to personally thank our wonderful high school administrative team led by Principal Debora French and Assistant Principals Diana Blank and Daniel Goldberg,” he added.

Mr. Drosopoulos concluded by acknowledging his time at Briarcliff.

“I have had the privilege and pleasure of leading the Briarcliff Athletic Department for the past 20 years. It has been, without a doubt, the best years of my professional life,” he said.

Following the speech, the students each signed their Letter of Intent and posed for photos to commemorate the event. 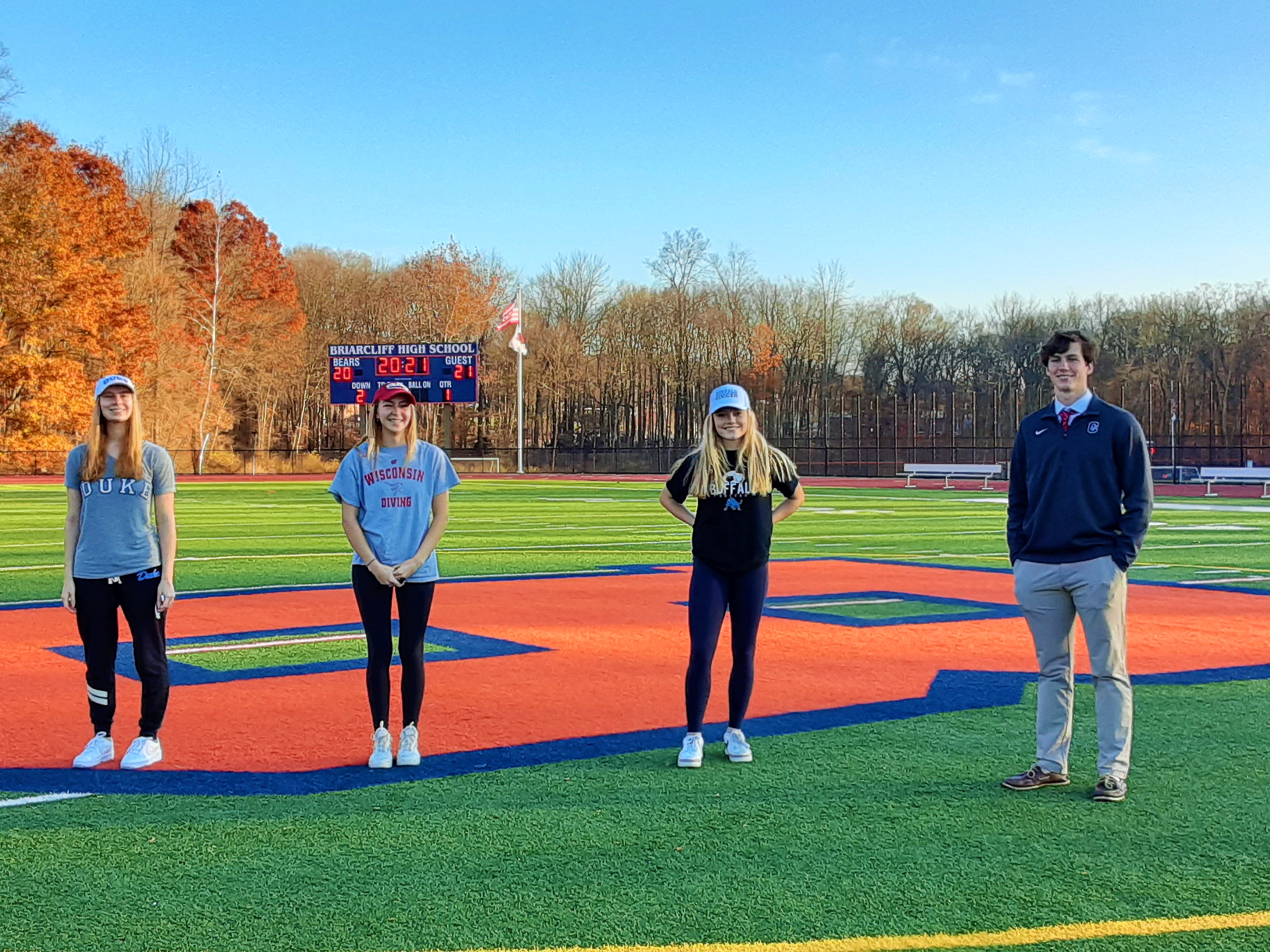 Here are the students’ bios:

Catherine was seven years old when she and her older brother took their first fencing lesson at the Peekskill Hat Factory. After fencing for a year in Peekskill, she advanced quickly and switched clubs to the Fencing Academy of Westchester, where her fencing took off under coach Slava Grigoriev, who still remains her coach. She has fenced all over the US at the national level as well as in European Cadet circuit events as a member of the USA Fencing Team during her sophomore and junior high school years and was ranked in the top ten in the USA. She won her First National Championship in the 2016 Dallas Summer Nationals in the women’s Y12 foil division. She has since gone on to win many top eight results, including third place in the Junior Women’s Foil at Junior Olympics in February 2020. She never stopped working out and during the pandemic, she kept up on her fencing skills on Zoom and has been back at her current fencing club four to five times per week. She is so excited to fence at Duke University in the fall 2021 on the Women’s Foil Team.

Yasmin has been a member of the Briarcliff Manor Village Swim & Dive Team since she was 6. She swam through sixth grade and started diving in seventh grade. She dove and swam as part of the BPVW combined team in eighth grade. This is her fifth year on the team. She has numerous accolades in diving, including all-conference, all-section, & all-state. She holds the school & team records for the 6 and 11 One Meter diving events. She qualified for sectionals every year & was a three-time qualifier for the state championships placing fifth in the NYS HS Championships last year. In age group diving, she competed and placed well in numerous national & regional level competitions, including the AAU Nationals, the YMCA Nationals, & the USA Diving Zone & Regional Championships. In 2019 she was awarded All-American status, which is bestowed upon the top 100 divers in the country. She is looking forward to Diving at the University of Wisconsin in the fall of 2021.

In Aidan’s high school academic career, he has been a member of the National Honor Society, the Rho Kappa Honor Society and the Math Honor Society. He has been a part of the Varsity Basketball team for four years. During that time, he was captain for three years. He has played Varsity Lacrosse for five years, during which two of those years, he was team captain. The team was All League and in 2019 they were Section and Regional Champions. They also garnered Third Team All State and received the Lohud Hudson Valley Second Team Award. He is looking forward to continuing his career playing Men’s Lacrosse at Colgate University in the fall of 2021.

Ashleigh started playing soccer with AYSO in Armonk when she was 4 years old. She moved to Briarcliff and joined AYSO in Kindergarten. In second grade, she tried out for third grade WYSL and made the B team. That was motivation for her to be the best player she could. She made the Red Bulls Developmental Program in fifth grade. She moved from WYSL to travel in sixth grade to the New York Soccer Club where she has played for the past seven years. She has played soccer all over the country and made some of her best friends during her soccer career. She could never have achieved this milestone without her hard work, training at NYSC, as well as per personal training at Velocity Sports Performance. She can’t wait to begin her career at the University at Buffalo in the fall of 2021.