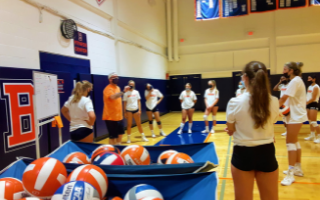 Student athlete were back on the fields and in the gym as Briarcliff High School began the fall sports season.

“This year we are very eagerly looking forward to getting back to normal and having the students compete and have fun,” said John Schrader, Assistant to Briarcliff Athletics Director, Chris Drosopoulos.

The season has begun this week and athletes were spotted playing a variety of sports, such as volleyball, tennis, soccer, cheerleading, field hockey, cross country and football.

“I want the kids to come out and have fun and have a full season,” said Varsity Girls Tennis Coach Denise Hamlin, as she was coaching student athletes at the tennis courts.

Varsity Football Coach Skip Stevens is also looking forward to the new fall season, but admits he will be facing some challenges.

“It is going to be a lot more competitive this season,” he said. “We are a young team – there were a lot of seniors last year, but this year there are a total of eight seniors, the rest are underclassmen. But we have the energy and the tenacity to get better each year, like we have been. The team realizes that if they work hard they will be successful,” he added.

Varsity Girls Soccer coach David Villalobos has a unique challenge of his own this year – it is his first year as a varsity coach.

“I coached junior varsity boys before so coaching at the varsity level was a goal of mine. I want to get better at the tactic side of it,” he said. “It is an exciting challenge. When each day ends I am excited for the next day.”

Given that the previous coach was in the position for 18 years, Villalobos said it would be challenging for the players.

“They will have to get used to listening to a new voice, hearing new ideas, trying a new system,” he said. “Right now, I am very excited - the girls are awesome! We are a family and we will help each other any way we can. We are looking forward to our first game against Valhalla and hope to have a good season.”

“We had a good start to the season and hopefully things go well and we will be successful, in keeping with our tradition,” he said.